I have been wanting to put together a patrol of the famed Long Range Desert Group for some time. Made up of hardened desert soldiers, former explorers and adventurers the LRDG was a bold and daring reconnaissance and combat force that could seemingly attack axis forces anywhere behind the lines, almost at will. I have opted to build a Mid-War patrol so that it remains compatible with my current 1942 forces. Using the MW LRDG list from the Burning Empires book I have taken every upgrade I could to give this small and compact unit some real punch.

There is still room for expansion of this force with the possibility of adding Commando Platoons and additional transport vehicles to give it more flexibility in its missions. I can also add in a few Stuart Light Tank platoons from the list, although I haven't yet read anything to suggest these were used extensively by the LRDG. I know that some Stuarts were trialed by the Group but they were quickly found to be unreliable and unsuitable for the sort of missions this unit was created for. Another option is to build an SAS Patrol as they worked closely with the LRDG throughout the war.

For this special unit I opted for the expensive option and bought all the models I needed from GHQ in the States. By the time I paid for airmail from the US and import taxes in the UK each vehicle works out four times as expensive as the equivalent from H&R... but the detailing and quality of these models is truly outstanding and worth every penny.

Deciding on a suitable colour scheme for these vehicles proved to be more difficult than I first anticipated. All the sources I have read have revealed that there was no official policy for camouflage and that individual Patrol commanders had considerable latitude with regards to colours and patterns. Most trucks were probably supplied in a sandy coloured paint scheme but few stayed that way for long. Common examples of camouflage included a hard-edged splinter camouflage in a dark grey, another utilised a randomly applied scheme of pink and light blue. One garish example that often gets mentioned consisted of a random vivid arrangement of pink, yellow and green! However the desert sun quickly faded the colours and the weathering the effects of dust and sand eventually resulted in a much more muted paint job. 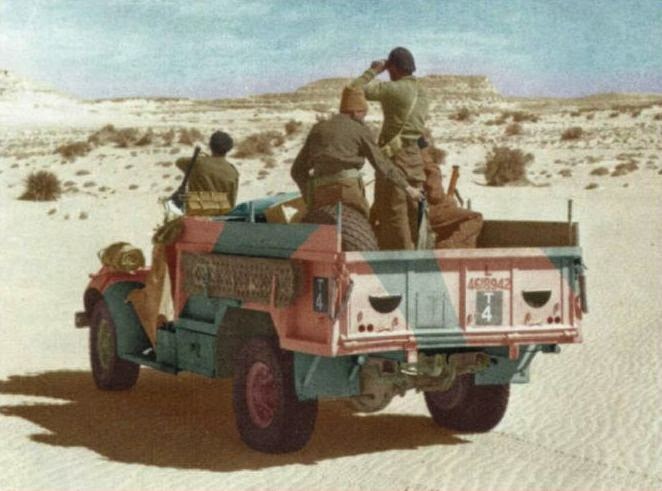 
In the end I have opted for a hard edged splinter pattern in faded Desert Pink and Pastel Blue with various items of equipment retaining their Dark Sand (947) base colour. I couldn't find a suitable Pink or Blue, so in the end I blended my own based on various pictures and how I wanted the finished models to look. I won't give a blending recipe because I think this is a matter of judgement and personal taste rather than being an accurate historical shade. I think the results are quite striking and look very authentic when compared to period photo's and the many of the colour schemes I have seen online and in print.

I've been working away on these for a week now and I'm really happy with how they are turning out. The colours are not as bright as they at first appear, especially after weathering and ink effects have been added. I have just a few things to finish and I'll post pictures of the models sometime next week.

The best sources I have found for colour schemes and other information about the LRDG are: