Yesterday a handful of Posties Rejects gathered in the Shed-o-War to refight the Battle of Alam el Halfa. For me this marks the culmination of a year long project to convert the Flames of War rules to use with 6mm models. This was my first time as Umpire for the Rejects and I was very nervous, but once play commenced I was far too busy to worry about if it was all a hideous mistake. I'll leave the writing of detailed Battle Reports to the players and instead I thought I would talk about how I went about writing the Scenario and the compromises I had to make in order to pull it off. 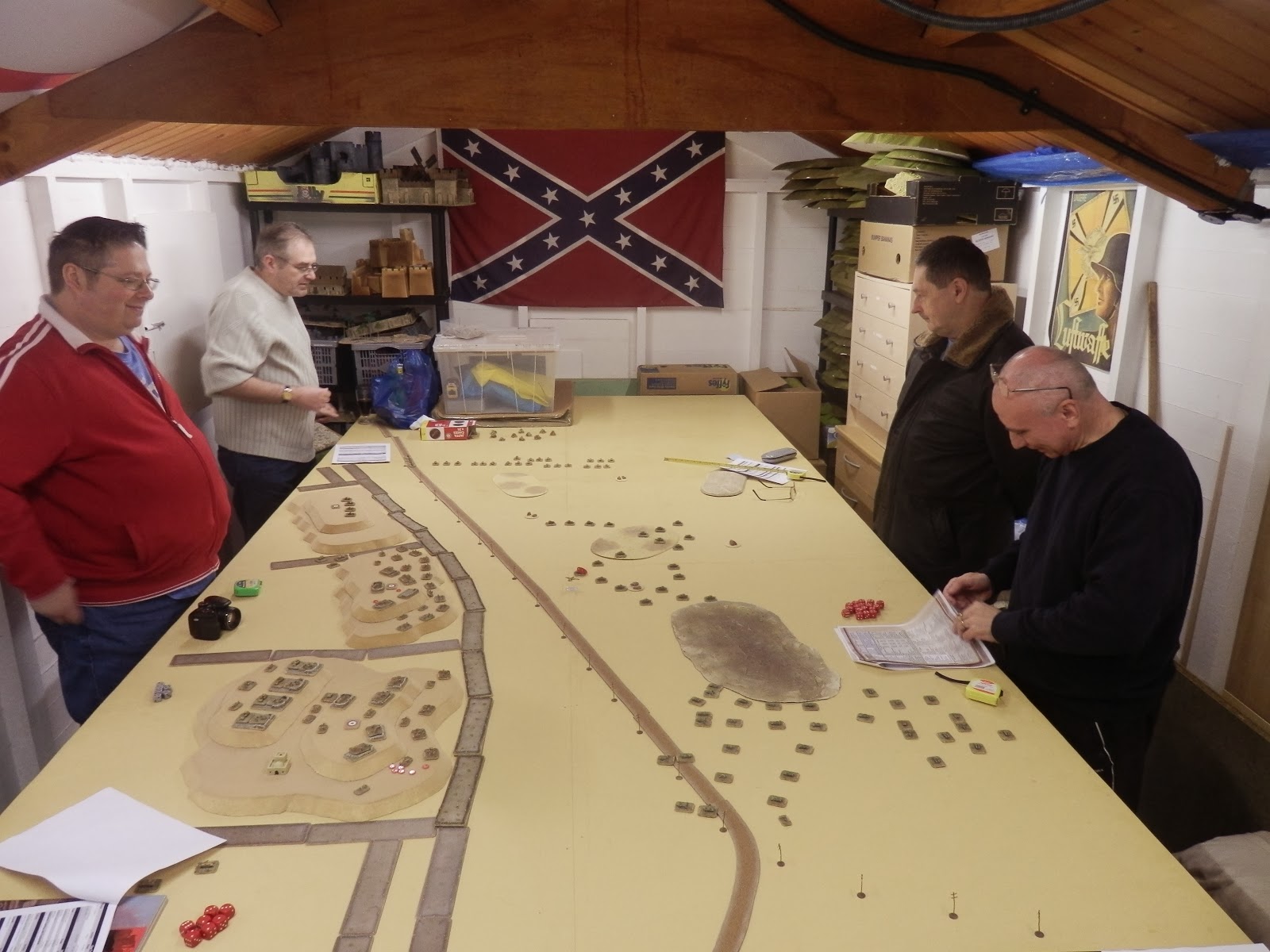 Its worth starting by saying this is entirely my interpretation of Alam Halfa based on the records and documents I had access to, and if there are any mistakes then they are entirely my own. From the very beginning it was clear that I would need to employ a certain degree of flexibility with how I represented both the terrain (see my post about Maps) and the forces involved if I was going to end up with a workable scenario. Although I wasn't too worried about employing asymmetrical forces I didn't want to make the game too unbalanced towards one side or the other because then it wouldn't be fun to play. The British have a certain degree of advantage - being in prepared positions - but the Germans shouldn't have an impossible task before them.

Setup:
The Northern edge of the Battlefield is dominated by three hills forming the ridge of Alam Halfa. This ridge is dotted with a string of gun pits for the dug in British troops and guns. Below the ridge is a continuous line of minefields that divide the British defenders into ‘Boxes’. Crossing diagonally in front of the ridge is a track way and a line of telegraph poles. South of this is the Deir el Muhafid depression which is classed as Difficult Ground. The only other major feature is the small hill El Huweijja in the South Eastern corner of the battlefield. 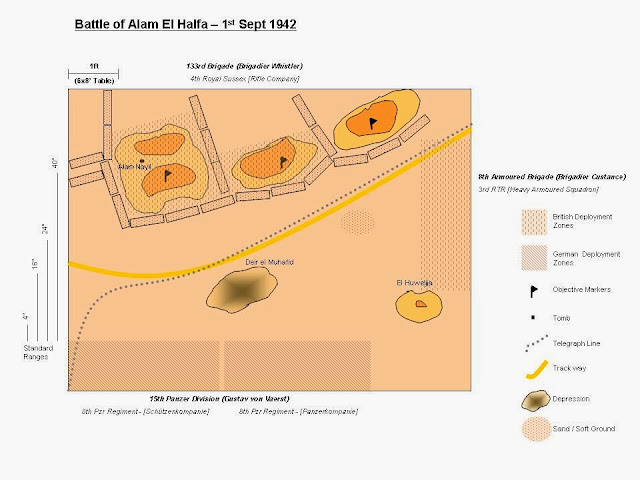 The Mission:
133rd Brigade: You are Egypt’s last Hope. You must hold the ridge along its entire length otherwise the whole defencive line will be weakened, forcing an allied retreat back to the Ruweisat Ridge. Reinforcements in the form of the 8th Armoured Brigade are rushing to support your Eastern Flank but the timing of their arrival is unclear.

15th Panzer Division: Rommel’s plan to sweep behind the British is going well, albeit a little behind schedule. You must take control of the ridge and secure it as a jumping off point for Phase 2 of the offencive. You know that a large force of allied tanks is approaching from the East but you do not know when they will arrive or of they will play any significant part in the coming battle.

Preparation:
1. The table should be set up according to the Battleground diagram above. Defences and fortifications are already included in the setup.
2. The Axis player’s starts with the Schutzenkompanie mounted in their transports and will all guns in tow.
3. The Allied players start with the Rifle Company deployed and dug-in along the ridge but may redeploy one platoon anywhere within their deployment zone.
4. At the beginning of the game the allied player must roll a d6 in secret to determine which turn the reserves (8th Armoured) will arrive on the table. Regardless of the dice roll the reserves never arrive on the first turn.

Special Rules:
Reserves come on from the eastern edge of the table in the deployment zone specified. Fortifications should be set up as detailed on the map. The defender gains no further fortifications.

Beginning the Battle:
The Attacking player (the Germans in this scenario) move first.

Winning the Battle:
If the Axis player starts any of their turns in control of an objective the game ends and they have won. After 8 turns, if the Allies retain control of all objectives they have won. Calculate victory points based on the number of platoons the winner has lost from each of his companies to determine the scale of the victory.

Victory Points:
Because this battle has two German and Two British companies facing each other, calculating the VP's for the winner is a little more complicated than usual. Calculate the VP's for each of the victors Companies based as usual on the losses inflicted upon them. Add the two results together and compare against the loser's VP's to calculate the difference and thereby the degree of victory enjoyed by the winner.
Difference in VP's
2-4 Points Minor Victory
5-7 Points Major Victory
8-10 Points Stunning Victory
Historical Outcome:
Montgomery gave his tanks defending the Alam Halfa Ridge to the west strict instructions not to engage in ‘Balaclavering’. Instead they were to remain in their positions and let the Axis Forces smash against British prepared positions until they were spent. This is exactly what happened, with Rommel’s Panzer Divisions unable to break through at Alam Halfa, and taking heavy loses in the process. The German offencive was effectively over after this engagement and with fuel running dangerously low; Rommel was forced to retreat to his former positions.

The victory at Alam Halfa raised British moral to new heights and gave the 8th Army the breathing space it needed to prepare for its own offencive, scheduled for late October. The massive build up of men and material that followed would culminate in 2nd Alamein and would mark the “the end of the beginning” for German and Italian ambitions in North Africa.

The Game
I'll leave writing of a detailed battle report to the players (keep an eye on Rays blog Don't Throw a One) but here are a few pictures that I took during the game. I was a bit over ambitious with the scale of this battle, especially for my first time Umpiring. There were a few teething problems early on due to my lack of understanding of some of the game mechanics but eventually the game progressed reasonably well. Next time - and there will be a next time - I'll go for something a little simpler!

One of the problems that made this a difficult game to umpire was the fact that none of the players (other than Clint) had played with these rules before. This meant that I was doing pretty much all of the 'book keeping' and calculations for everyone during the battle. This wasn't their fault, it was mine for giving them a such a complex set of figures to master. I provided everyone with the relevant army lists and stat sheets but to be fair, it was complicated for me, let alone these guys coming to the game with no preparation of prior knowledge. Next time I'll run something a lot simpler (maybe a big tank battle) so that everyone can get a better grip on the game.

Having said all this I still think the game was largely a success. We played a full-on multi-company battle across an 8ft by 10ft table over a period of eight hours and at the end we had an emphatic but hard fought win for the British.
Posted by BigLee at 18:20