I have been looking online for a suitable Smoke Bombardment Template that I could use in my FOW games, but largely without any luck. There are several makes of template available online for different game systems but all of them are a bit expensive and just didn't work for me. I could of course utilise the Artillery template but as the smoke remains on the table until the start of the following turn I really wanted to use a proper Smoke Bombardment template. The rules allow for several of these templates on the table at any one time and to buy multiple examples of the commercially made products could easily set me back over £40. So I decided that before I parted with my hard earned cash I would have a go at making something myself, and I'm rather pleased with what I have come up with. 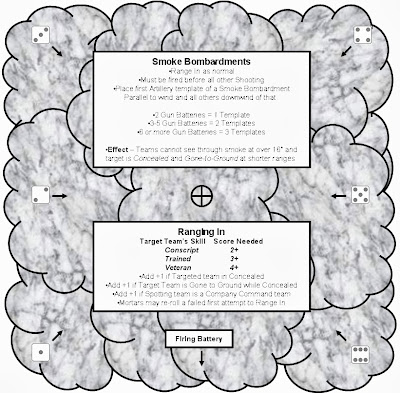 I created this template in little under an hour using PowerPoint with the express intention of printing them on thin plastic transparency paper. I want to be able to see the miniatures underneath the template so that measurements to and from teams could be made without having to move the template. I made a couple of test templates using this Transparency paper but I really wasn't happy with the result. The plastic was very thin and floppy and was far too reflective which just didn't look at all appealing. Then I found some old plastic report covers that I had stashed away. These are much thicker plastic but still remaining quite opaque.

Fortunately the printer handled this thicker plastic quite well and the resulting templates are much more robust while still remaining clear enough to see through as can be seen in the picture below. I've printed half a dozen of these and in the process have saved myself a small fortune by doing it myself! 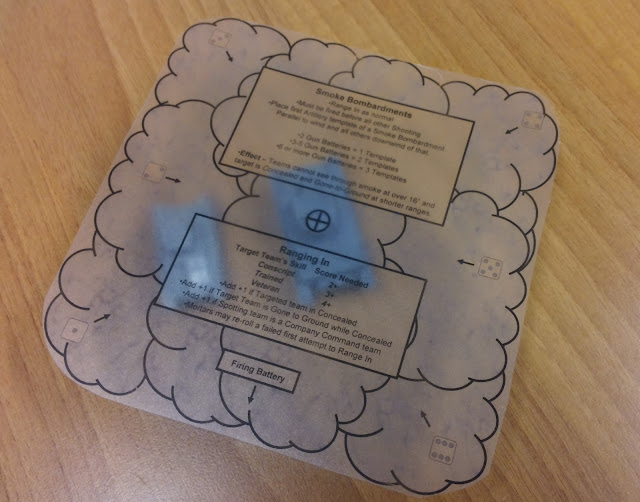 On the offchance that someone else might find this useful I have uploaded copies of the template as a PowerPoint file and as a PDF file onto Google Drive and made them 'Public' so they can be downloaded by following the links above.

UPDATE: I've just found that the 'report cover' plastic isn't the best to print on. The ink sticks to the plastic fine but it can be rubbed or scratched off. I've gone back to the Transparency paper and this 'fixes' the ink much better and doesn't rub off. The downside as already mentioned is that a) its clear not frosted and b) its thinner and therefore more flexible. It doesn't look as good as the origional but it does the job and will last many games.
Posted by BigLee at 13:27