Most of the examples of Wheat Fields as terrain that I have seen are made from Coir Matting. I was fortunate in that I found a large off-cut from when I had a mat fitted in my porch, so I didn't have to buy any for this project. However its not particularly expensive and you should be able to purchase enough mat for your needs for under £20. Coir Matting is made from a coconut by-product making it a tough material to cut, especially when bound onto a tough rubber backing to be laid on the floor. I found it best to cut this material from the back using a sharp Stanley knife or other DIY blade. Don't use your craft knife, it will almost certainly break. 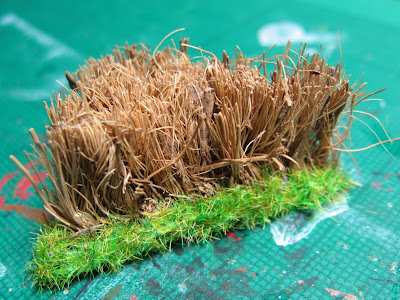 I started by making a small test piece so I could determine how hard it was to cut and what sort of finish looked best. I experimented by leaving one side 'unfinished' and trimmed the other side with a blade. Be very careful at this stage, its easy to slip with the knife and you don't wan't to get blood all over your nice new wheat field! In the end I found it easier to trim the edge with a strong pair of scissors which game the fields a nice chamfered edge. This not only looks neat but it also looks like a real field where the wheat around the very outside of the crop is slightly smaller than further in.

Warning! Before I go further its worth mentioning that this whole process is very very messy. I ended up with coconut shavings and bits of rubber backing all over my work desk and the floor. If you wan't to avoid the death glare from your 'significant other' I suggest you do this in the garden or down the shed. 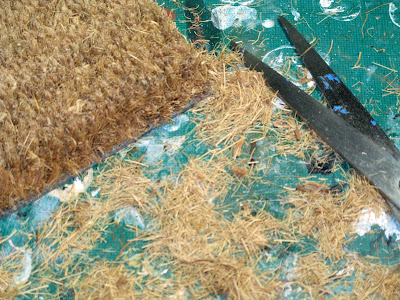 Experimentation done I decided to make about eight wheat fields (I have plenty of Coir matting remaining for future use). Lay  the matting face down with the rubber backing towards you. I marked out the size fields I wanted using a black pen but you could cut your fields freehand. Using your sharp blade score the underside of the rubber backing several times. Eventually you will cut through to the coconut matting and then the two pieces can be pulled apart. Within a few minutes I had eight square and rectangular fields made ranging in sizes from 15x15cm to 15x30cm. I don't know if this is the correct size for 15mm/Normandy wargaming but I can always make some more if I decide I need larger fields. 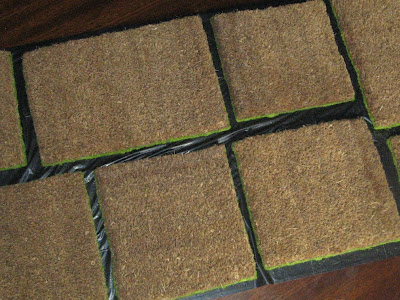 Next I took a heavy duty pair of scissors and trimmed the edges to tidy them up. This stage really does make a difference to the finished look but is also probably the hardest part of the process. The coconut material is incredibly tough and hard to trim, even with a large pair of scissors. By the time I had trimmed all eight fields my hand and wrist was killing me.

With the edges trimmed all that remains is to cover up the grey rubber backing that is now exposed around the edges. I used PVA glue - applied with an old brush - to these edges and then dipped them into a tray of static grass several times to ensure good coverage.

And that's pretty much it. Eight terrain pieces completed in about an hour (plus half hour cleaning up the mess afterwards). Not bad for a mornings work. 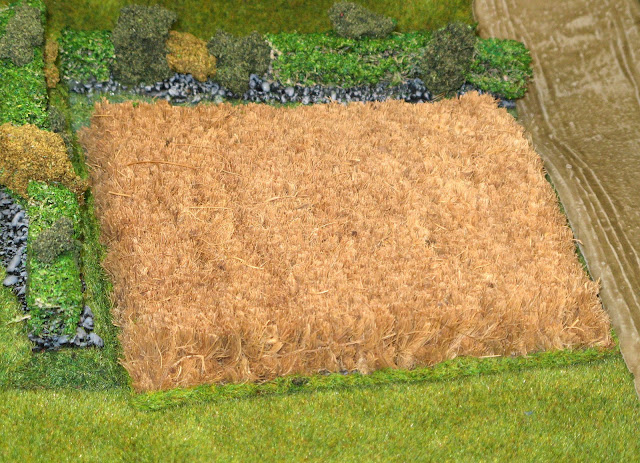