If you like the off centre humour of Terry Pratchett and the improbable inventiveness of Douglas Adams you’ll like this book. I was laughing from the first page and could see my own gaming group, the Dagenham Dungeon Delvers, in all the characters (sorry guys). Written in the best tradition of English satire it will appeal to anyone who has ever used a d6 in anger. 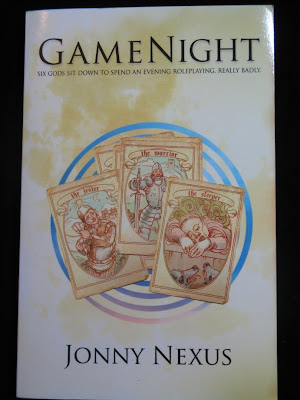 The story consists of two overlapping threads. On face value it is about the heroic (or not) actions of a group of adventurers in their bid to save the world. But their narrative is constantly inter cut with the squabbling of the six gods sitting round a games table controlling those heroes. And patiently trying to keep the story on track is the creator of that world, the All-Father. This archetypal GM is reduced to distraction as the world he created and the story he is trying to tell gets abused and trampled on by his players. The squabbling of the gods often reduced me to out loud laughter as they took back actions, sniped and bitched at each other and rules-lawyered on an epic scale. Yes it is an extreme caricature of a gaming group, but it is grounded in examples every gamer will recognise.

The author, Johnny Nexus, was a regular columnist for the magazines Valkyrie and Signs & Portents and is the editor and chief writer of the cult webzine Critical Miss. This book was given the well deserved honour of being nominated for a Gen Con ENnie and you can see a free preview of the first chapter here [ chapter one ].
Posted by BigLee at 12:00