According to Webster's Revised Unabridged Dictionary a Liar is a person who knowingly utters falsehoods. So when I stated unequivocally in my earlier post that I had no pictures of my early games I wasn't technically lying. I spent some time over the weekend sorting through all my old photo albums. I have been trying (for some months now) to digitalise my old print photos that were taken before the advent of Digital camera's. And guess what I found....

This was an Epic 40k game c1995. Note the oval shaped table pressed into service as a games table. Note also the 'high tech' scenery in the form of felt rivers and painted styrene hills. This picture shows my friend Andrew pondering his soon to be overrun positions. 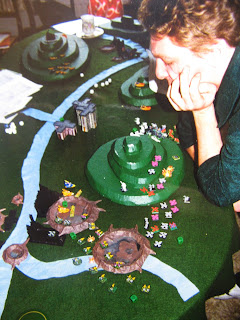 Another good friend, Peter, moving his Eldar into position for the killing blow. It must have been a stealth move because Andrew seems oblivious to the impending disaster. Both these guys are still part of my current gaming group, the Dagenham Dungeon Delvers. 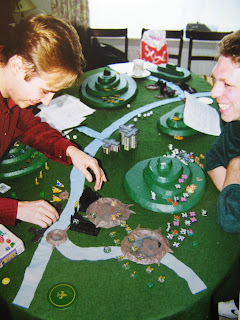 Another Epic game this time on the floor of a friends house and utilising a more traditional rectangular battlefield. Space was always an issue when we played. We rarely had a suitable table on which to play and it was common for us to spend games crawling round the floor. My knees ache just looking at this photo! 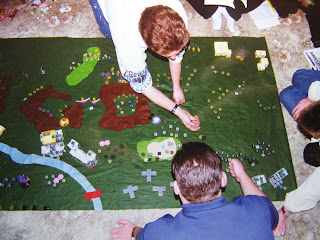 I think this is an even earlier game - this time Warhammer - from about 1989. This is the only picture I have of my beloved Undead Army. We used cut up floor tiles for terrain but they were very heavy to transport and were soon replaced. 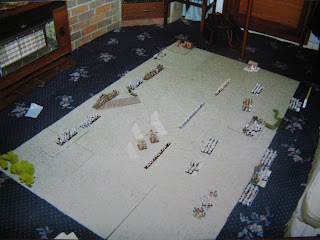 If I turn up any more pictures of these old games I'll post them as well.
Posted by BigLee at 08:29