Recycled Terrain and a Bigger Table

It has been another busy week in the Operations Room, with more terrain work and the long-awaited table expansion (more on that later). I have put in a couple of orders for new miniatures but expect to be waiting for them for a few weeks. This is a combination of delayed (and more costly) shipping from the continent and the inevitable covid related delays for manufacturers still trying to get back up to full production. I'm happy to wait for their arrival but in the meantime, I have been scrabbling around looking for some new terrain projects to work on. This week I have managed to recycle or repurpose several bits of terrain for use in my 15mm Normandy games and in the process, I have realised I have an untapped resource that can keep me busy for some time to come.

Hen House
The first project to show off has been the most fun to work on. Several years ago while at a local boot sale I found a few bits of a train set for a few pounds. The main item was a box carriage that I thought looked to be about the right size for my 6mm desert games. The box it came in didn't state the scale but when I got home I looked the manufacturer (Graham Farish) up and realised it was 'N' Gauge, which is roughly 10mm scale. So it was too big for my 6mm games and too small for 15mm and went in a box of bits and bobs in case I found a use for it another time. Roll forward a couple of years and when I found it again I had a brainwave. 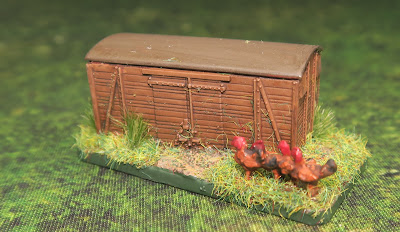 The Box Carriage was too small to be 15mm but what if I treated it as a narrow gauge carriage? There are several narrow gauge railways in France (as there are in England) and I have occasionally seen disused carriages being recycled into sheds and henhouses. Indeed there used to be a small city farm not far from where I live in East London which had several small carriages recycled as sheds. So it's not a great leap of imagination to expect a thrifty Normandy farmer to buy an old carriage and use it to make a hen house to provide eggs for his morning breakfast. To add a little detail, I found some chickens from Peter Pig that I bought a few months ago and added them to the base. 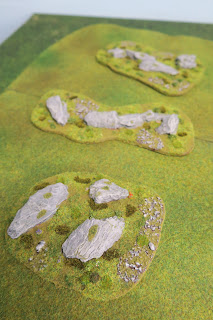 Rough Ground
About three or four years ago I bought a  large bag of pre-built terrain from the Bring and Buy at a show in Kent. All of it was repainted for use in my North Africa games but there was so much in this that I could never use all of it in a game (especially on my small table). So I have recycled three of the smaller pieces that I thought would make good-sized pieces for my Normandy games. I started by re-priming the whole model and then repainted them entirely for an NW European setting.

Most of the work on these was actually in the grass and tufts around the rocky outcroppings. I wanted these to look like difficult ground so there are varied textures and shades alongside the rocks. There was a surprising amount of waiting/drying time between stages so I worked on them over a couple of days. I anticipate using these sparingly on the tops of hills in particular. The groundwork means that can be used for both 15mm and 28mm games and I expect they will see plenty of service in the years to come.
Granite Sheep Pen 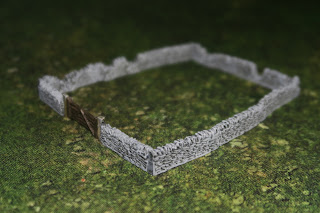 This is another bit from the train accessories that I bought years ago, this time a small section of walling from Hornby. Again it's N Guage but it is ideal for use as a small sheep pen or other small enclosure. I repainted the sections of the wall to a proper slate grey colour so it will be suitable for pretty much any setting.
Some of the wall sections are tumbling down so maybe it's abandoned and disused, but I'm sure it'll be appreciated by some poor infantry trying to get any cover they can while under fire.
The next big thing to happen this week was the long-awaited table expansion. Having had a little tidy and reorganisation making a little bit of space in my small room, the first thing I decided to do was fill that space even more! My folding games table only measures 2' 6" by 4' and while I have had plenty f great games on this small surface I wanted to expand just a little bit. The maximum size I could reasonably get in my room was about 4'x5' but that really did leave very little room for me. In the end, I decided to go with 3'x5' and for that, I would need to get some sheet timber cut to size. Try as I might I couldn't find a local builders merchants so I ended up visiting my local B&Q, buying a sheet of 12mm MDF and getting them to cut it to size.

Obviously, it's not a full-sized table but it is closer than what I have been using and more than sufficient for solo games in my Operations Room.
Posted by BigLee at 12:00