AHPC XI - Week One in a Fantasy World

Ten Days ago the Analogue Hobbies Painting Challenge got underway and I've been using some of my Christmas Break to get stuck into some early submissions. I've already posted a picture of the Viking Santa I did in the first few days and I quickly followed this up with the figures shown below. I tend to work on multiple models at the same time so while I'm painting model B, model A is drying etc. So at one point, I had five different projects on the go at the same time, something that only happens during the Painting Challenge.

My second entry to the Challenge was the first in a series that is part of the 'bonus rounds', an optional side challenge to the main competition. Participation here will net quite a few bonus points and gives me a comfortable start on my campaign for this year's event. Some of the categories will be a challenge to fill, but I reckon I can get some really old figures painted and on the games table this winter. 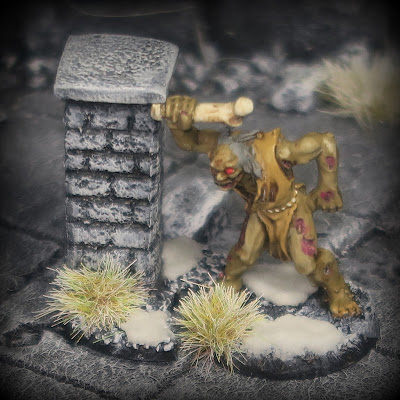 And so I light my lamp, ready my sword and descend the stairs into the notorious dungeon known as the Chambers of Challenge. The first room I encounter is the Hall of Traps and here I find a Ghoul has taken up residence. Hiding behind a column the Ghoul lays in wait for the unwary or inexperienced hero. Many an adventuring career has been cut short in this room... but not today. This is figure is 25mm tall and was made by Grenadier sometime in the 1980s. The date cast into the bottom of the solid base was partially filed away so all I can say is it was sometime in the '80s which makes this ghoul quite an old boy. I've also painted the column he is hiding behind and mounted it on a custom base so it snugs up next to him (so I could say he was lying in wait) but that's such a basic paint job I don't expect any points for that. 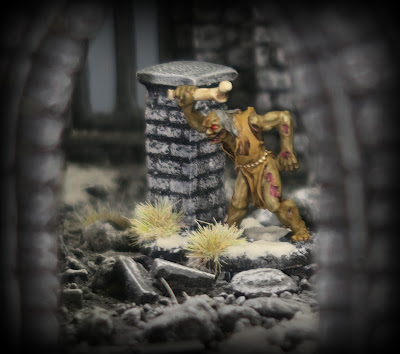 My gaming origins are very much in D&D and the old Red Box version of the rules. I was introduced to the game by a good friend of mine at school and over 35 years later I'm still playing with him and others from those early days of gaming. So when I saw the bonus rounds would be the Chambers of Challenge, and then looked at my pile of unpainted figures from that period, I knew it was a match made in heaven. Although it has to be said most of my roleplaying takes place online now, so the need for figures is much reduced. So instead of painting models for D&D, or just for display as in previous years, this time my bonus entries will be painted for use playing Frostgrave.

Having scratched my head and come up blank with the Pit of the Pendulum I decided I needed to skip that room on the Chambers of Challenge map. This can be achieved by being 'teleported' anywhere on the same level by the Sorceress. The cost for such an act is a female figure and so I decided to have a rummage in my Fantasy Lead Mountain to see if I had an appropriate figure. My third entry was therefore a Female Wizard with shimmering pink hair! Once again I have painted this model for use with my Frostgrave collection and have based her appropriately to fit the theme for these figures. 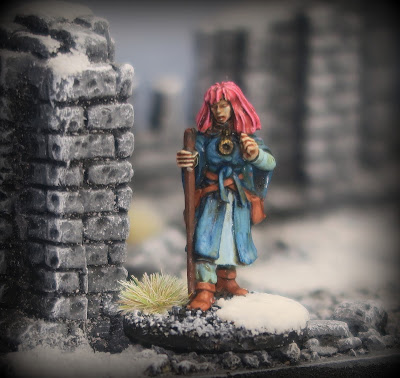 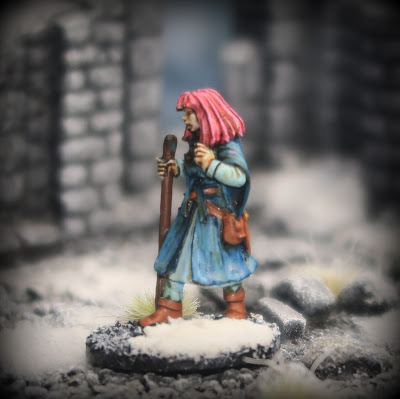 I'm not sure where I got this figure, like much of my collection it was probably an impulse buy somewhere back in the mists of time! Indeed I recently found another box of figures hidden in a cupboard that missed the big tidy up when I got my games room together last year... I wonder how many more surprises await me in fark corners of the house. I have this rather macabre image of my poor wife finding boxes of figures long after I have shrugged off this mortal coil, muttering under her breath about my silly hobby!

The Golems Haunt and a Tomb Wraith

My fourth entry this year was another fantasy figure for the Chambers of Challenge. I'm quite enjoying working through my fantasy lead mountain finding figures I had forgotten I even bought! So, having materialised in the Golems Haunt after transport by the Sorceress, I find myself face to face with the ghostly apparition of a Tomb Wraith. 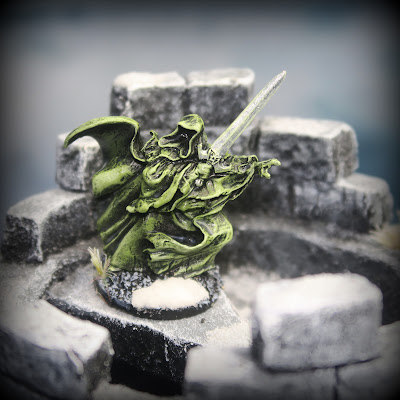 I stretched the definitions for this category just a little, but I decided that a Wraith could be considered to be 'reanimated' or re-created and it justified painting this wonderful 2003 Reaper Miniatures figure. Solid metal, it has got quite a heft to it and the flowing billowing cloak is just wonderful. I've painted Wraiths before (in classic LOTR movie-style black and white) but this time I wanted a bit of colour so went for muted greens instead. Multiple dry brushes were required and it took longer than I thought it would, but I'm really happy with the finished model. Once again I have based it for use in my Frostgrave games. In the past, many of my bonus round figures have been 'display figures' only, but this year I'm trying hard to make sure as many as possible are usable on the games table. 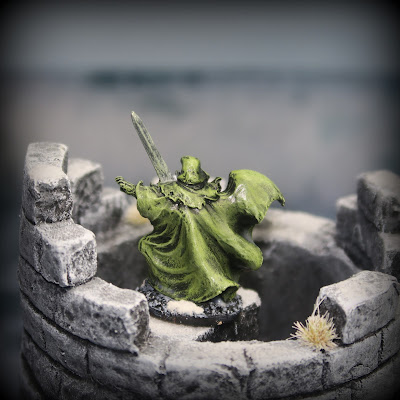 Having completed one monochromatic figure I found myself contemplating moving on to a much more challenging task, greyscale! In over 30 years painting miniatures I've never attempted that before, so the Chamber of Darkness will be a real test of my meagre skills. That figure will be up on the Challenge blog today and I'll repost it here in net weeks painting roundup.

Until then, stay safe everyone.