Once again I am revisiting a subject I have touched on several times before. I have made wheat fields on a number of occasions and have utilised the traditional materials of hessian matting and teddy bear fur. However, as with my ploughed fields, the finished products never quite looked right and were usually too small for my needs. So I bought a couple of square meters of fur fabric and set about making a new collection of versatile and cheap wheat fields for use with 15mm and 28mm scales. The only work I did on these was to give the rather shiney synthetic fur a dusting of light beige spray paint (I used a car paint from Halfords). It has to be applied sparingly or the fibres clump together and don't look right. 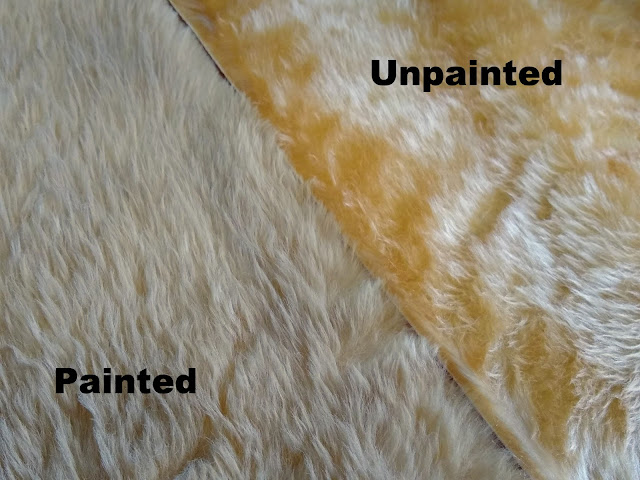 There's nothing particularly innovative about this project, many wargamers have made use of 'Teddy Bear Fur' for fields before, including myself. Their use largely depends on your own personal aesthetic. Some people don't like the wavey look of fur and prefer the look of coconut matting. Some, like me, prefer fields where troops and vehicles don't float across the top of the wheat when they pass through. This is one of my main reasons for not wanting to use this material, but also that the fur fields are much lighter and flexible so they can be folded around the edges of the battlefield if, like me, you have a smaller table.

One thing to note is that modern wheatfields are not the same as those seen in the early part of the 20th Century or earlier. The wheat seen in a modern filed is a very long way from the wild variety first cultivated by humans 10,000 years ago in what is now southeastern Turkey. Ancient species were very tall, averaging about 160cm or well over 5ft tall. By the early 19th Century, Wheat was the most significant cereal crop grown in Britain but it wasn't until the mid-1800's that the first plant breeders started to produce single varieties that gave higher yields by selectively breeding the best ears from their crops. These plants were shorter than the ancient variety, standing about 130cm's tall.

Fast forward 50 years and by WWI a hardy wheat variety called Yeoman was becoming prevalent in Britain and its crops stood about 110cm tall. The next big change occurred in the 1980s with varieties like Skyfall developed specifically to service the demand for white sliced bread. However, this relied on the use of liquid fertilisers to increase yields increasing the need for shorter plants which were less likely to fall over. Modern wheat is typically only about 60-70cm tall, less than half the height of the ancient variety.

The reason I have presented this short (and rather dull) potted history of wheat is that the 'look' of a wheatfield will have changed over time. The further back in time we go, the taller the wheat and the more likely it is to be affected by the wind resulting in a rippled and wavey surface -  like the fur fields. Modern wheat on the other hand probably does look very much like the coconut matting seen on many games tables, because it is short with stocky stems capable of holding up larger seed heads. It doesn't (in my mind) look anything like the wheat typically seen as little a 100 years ago.