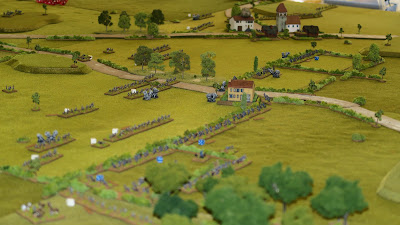 Once again the Rejects got together in Posties shed-o-war to give his new WWI rules another try, this time with a fictional engagement between the Germans and French in August 1914. Once again Posties proved his rules stand up to scrutiny in a real game and everyone taking part seemed to be having a good time.

The Schlieffen Plan is under way and thus far the German Imperial Army has been forcing back the French at every engagement. Now the French have an opportunity to defend more favourable ground along a line of hedges anchored on several buildings and a small village. The Germans must sweep the french away to keep up the momentum but can the French hold their ground and turn the tide against the invaders?

That was a tough fight for both sides and for a brief while I thought the German assault on my flank would win. If our reserves had come on a turn later, or in a different position, I couldn't have held the position. I'm glad I was able to convince Mark to keep his infantry in the town because I think they soaked up a lot of artillery that would otherwise have hit softer targets. His riflemen in the town were also able to harass the Germans in all directions, Their 12" rifle range from all sides meant the town dominated one third of the width of the battlefield and the mere presence of infantry in buildings deterred the Germans from launching an infantry assault. Keeping infantry in the town turned it into a fortress and I suspect influenced the German players decision to focus their attack on my side of the battlefield.

Once again Posties simple streamlined rules worked excellently and really seem to capture the flavour of the early period of the Great War. All round an excellent game and I think everyone is looking to playing more in the near future.
Posted by BigLee at 07:05