I have been working on some more tanks for What a Tanker, this time some tiny Italian Fiat-Ansaldo L6 light tanks. These tiny 2 man tanks were originally built as an export product but were adopted by the Italian army and saw service in North Africa, the Eastern Front and domestically in Sicily and mainland Italy. According to the Surviving Panzers website (well worth checking out btw) there are only three examples remaining; one in Italy; one in the Citadel Military Museum in Albania; and the last one in the Kubinka Tank Museum in Russia. Only about 280 were built so its not surprising that so few still exist. 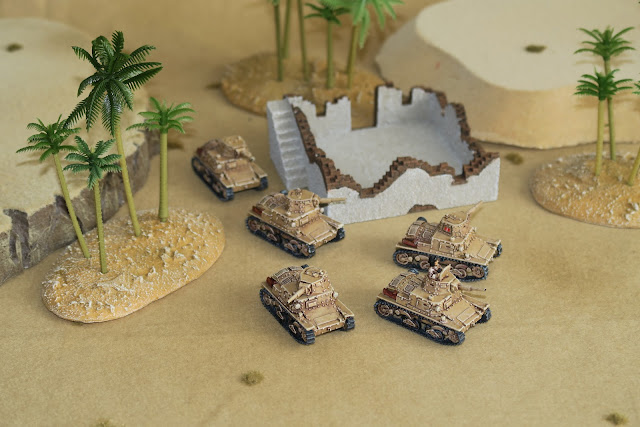 This was a very cramped tank with the commander also serving as the loader and gunner sitting on the left side of the turret. The driver meanwhile had to squeeze into a small area on the right of the hull. Overall the armour was pretty thin with the thickest of 40mm on the mantlet. Frontal armour on the hull was 20mm but elsewhere it was as thin as 6mm. The main defence of this tank was its small profile and its maximum speed of about 26mph. Not much for a crew to rely on when all they had to fire back at the enemy was a 20mm Breda cannon. 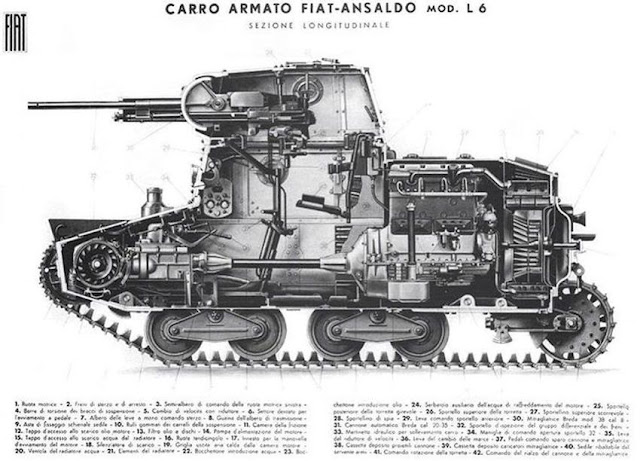 Its worth pointing out that the L6 was a development of the much smaller CV33 Tankette and the original specification was for a turreted vehicle with a 37mm gun. By the time this vehicle started to be introduced the gun had been downgraded to a 20mm but they had upgraded the engine to 70hp SDA 4 Cylinder which meant that despite being larger and therefore heavier than the CV series vehicles it was just as fast. The problem was Italian tank development always seemed to be running behind everyone else and by the time this vehicle was in service in significant numbers it was already outclassed by allied tanks. The Chassis of the L6 was later used as the basis for the Semovente L40 Anti-Tank Gun. 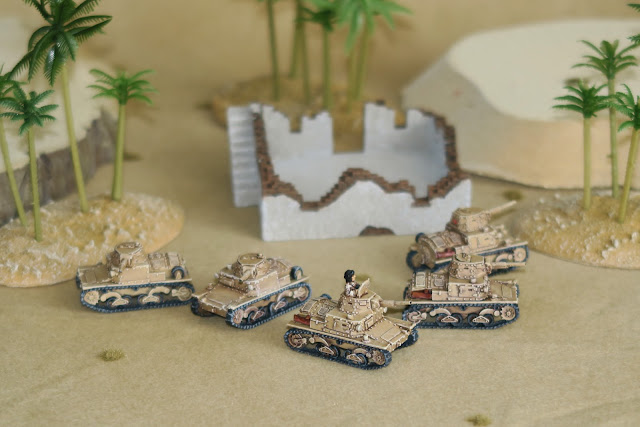 Another interesting point is that the Italians were still using Bolted and Riveted armour on an internal frame. The idea was that damaged sections could be easily removed and replaced. However in practice this rarely happened and riveted armour was much weaker than other tanks with a welded construction. In addition the internal frame would also have added unnecessary weight thereby limiting the amount of armour that could be used and still keep the vehicle within its specification. Unfortunately Italian tank designers had to take into consideration not just the tactical requirements specified to them but also political requirements. This held back innovation, used resources inefficiently and slowed down the speed of development. The L6 for instance was the product of a specification laid down in 1936.

Next on the painting table will be some M11/39's. Larger Medium Tanks but in many ways inferior to the L6's containing many of the same deficiencies that meant Italian tanks were always several years behind the designs of their opponents. Despite the inferior quality of their steeds, Italian tank crews were an Elite arm of the Italian Army and certainly didn't lack bravery when facing the British.
Posted by BigLee at 11:55