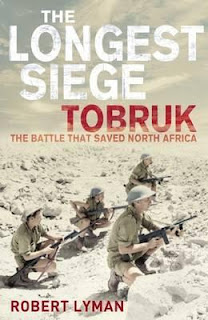 The Longest Siege: Tobruk - The Battle That Saved North Africa by Robert Lyman is a book that has sat on my shelves patiently waiting for me to read it for far too long. My renewed interest in this book was in no small part because of a chance encounter I had at the Military Odyssey living history show in Kent last month. I got chatting to a DAK re-enactor who said there had been a resurgence in interest in the desert war in part because of a proposed new film about the siege of Tobruk.

The first half of the book sets the scene by running through the early stages of the North African campaign. The invasion of Egypt by the Italians and the hugely successful Operation Compass that sent them fleeing back into Libya have been documented before so much of this is well travelled ground for anyone familiar with this period of the war. However as an introduction to the trials and tribulations of desert warfare these early chapters of the book do an excellent job of acclimatising the reader to the desert war.

I hadn't appreciated quite how the failure to capture Tobruk had dented German moral or how many risks that Rommel took to try and capture the town before the Allies could get properly dug in. In many ways this was typical of Rommel, acting faster than his opponents could react and keeping them constantly on the back foot. Rommel was initially convinced that the Tobruk defences were quite weak - based partly on the knowledge of how quickly the Italians had lost the town during the British advance - and expected his own brand of 'shock and awe' to sweep the defenders away. The Germans were soon to realise that the mixed bag of defenders inside, and Political and military leaders outside, were not about to let this happen.


Much of the second half of the book focuses on the early attempts by the DAK to capture the town and its eventual relief 242 days later. But for me the most interesting details relate to daily life for the men inside the defensive perimeter. Conditions were increasingly tough for the defenders but their resolve never seemed to waver. Daily air raids, dwindling rations and harsh desert conditions just seemed to make the defenders all the more obstinate and determined!

The failure to take Tobruk stopped the Germans in their tracks and seriously complicated supply of forward operations as they moved into Egypt. The Afrika Korp needed approximately 70000 tonnes of supplies to keep it operational in the field. Benghazi could supply 60000 tonnes but a significant portion of this would never make it to the front lines. Transport and the predatory actions of the RAF's Desert Air Force ate away at this total meaning that the potential 24000 tonnes that could be brought ashore at Tobruk was desperately needed if Rommel was to continue his eastward advance. In short, Tobruk was a vital part of the German offensive equation.


"The Mathematics was clear: without Tobruk, Rommel did not have the port capacity he required to sustain his troops in North Africa"

This is an excellently written book, full of interesting details and observations that bring the battle to life for the reader.