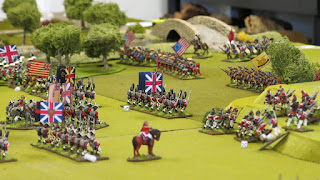 Last weekend the Rejects gathered in the shed-o-war for some American War of Independence action. Postie had his massive 28mm collection out on the table along with some pretty impressive terrain including several buildings by GrandManner. However the game started with hardly any Americans on the battlefield and the British, not unreasonably, suspected a trap.

Setup
The British are marching towards Mountjoy Manor where Sir Henry Clinton hopes to have a restful evening. However American Militia have taken over the area first. They have occupied the grounds of the house, protected by a wide unfordable river with just two crossing points. A 2nd division of Americans - this time regular troops - heads towards the further crossing point but the combined force is less than half the size of the British. The confidence and aggression of the Americans suggest they have more troops in reserve somewhere so the British respond cautiously to protect their flanks as they deploy for battle.

Analysis
This was a very uneven battle for most of the game. Surjit decided to keep the bulk of his army hidden off table, behind a ridge of hills for a 'surprise' attack when the British got close enough. I think most of us thought he had kept these troops out of the game far too long but there was method to his madness. Numerous one-on-one rules clarification conversations were had between the American commander and the umpire Postie (we lost count how many!) so Surjits decision was at least in part directed by these discussions. In short the American hoped to be able to launch a surprise move onto the battlefield, unleashing a massive volley into the flanks of the British who would hopefully be tackling the American division crossing the river.

On the British side we knew instinctively as players and commanders that we were not facing the whole American army. Defending their position with just Militia and one Brigade of regular troops was madness so there had to be more troops to come. One hint of this came in the form of a single skirmish unit that appeared across the range of hills way outside of command range...this was no random unit but the scouting vanguard of a much larger force. Consequently the British deployed knowing exactly what to expect. My Division of German troops were flank guard bringing up the rear of the column but in the best position to pursue the American scouts and push onto the ridge line.

Normally when we use flat levelled hills the rule is that for the sake of simplicity any unit on the top can see down all sides of that hill. In other words there isn't a theoretical ridge line blocking line of sight. Indeed this very ruling was enforced earlier in the game when one of the American Militia units accidentally manoeuvred itself onto a hilltop revealing itself to artillery fire from a gun positioned on the far side. So when my skirmishers got on top of  the long ridge line we naturally assumed that we could see down the far side. However it seems that we hadn't gone far enough on the hill and therefore didn't see the two Brigades of Americans hiding in the open behind the hill. This ruling gave the American players a chance to set their 'not-much-of-a surprise' surprise attack across the hill. In the end the American trap wasn't quite as devastating as they had hoped but none the less the British players were not impressed. There comes a point where all players have to accept the Umpires decision and move on - which we did - but it could have derailed an otherwise good natured game.

As the game came to a close it was hard to see which side had the points advantage. Both armies still had a lot of fight in them but with daylight failing the two antagonists would have to break off and fight another day. Certainly the British controlled the battlefield and the Americans decision to throw all their army into the fight only at the very end of the game had arguably shielded them from higher casualties. They were also in a precarious position with any routing units having virtually no room to retreat in. However the British have by this stage taken damage to virtually all their regiments, although their higher moral means they are less likely to break any time soon.

The points are added up and a narrow British Victory is declared. I think most of the players would agree this is a fair outcome given that the Americans do not control the battlefield and are bottled up on the very edge of the table. However we (the British Players) have had to work hard for our victory and have spent as much time on the other side of the games table as we have on our own side.
Posted by BigLee at 07:15