I have been working on some more terrain items for my 6mm North Africa project and this time I have painted some of the smallest 'Dragons Teeth' I have ever encountered. These are by Leven Miniatures and come as small bases consisting three rows of the pyramidal tank traps. These can be painted as delivered but I have found it relatively easy to break these bases down into strips and I have painted several different configurations to give some flexibility for use on the games table.

In the FOW Rules : Anti-Tank obstacles such as Dragons Teeth are impassable to all vehicles, cavalry teams, and non-man-packed Gun Teams. Infantry and man-packed gun teams are not slowed by anti-tank obstacles, but cannot move At the Double in or across them. 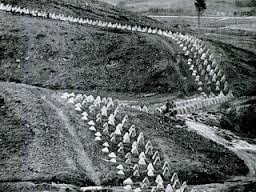 During WWII Dragons Teeth were deployed extensively across the European theatre and beyond as part of static defences. Designed to impede the advance of tracked vehicles they were often deployed in conjunction with pillboxes and minefields and were designed to channel armour into killing zones. The Siegfried and Maginot Lines employed hundreds of thousands of 'Drachenzähne' in rows of four or five interspersed with mines and tank ditches. In practise however such obstacles proved little hindrance to combat engineers armed with explosive charges or by simply burying them using bulldozers.

Along with other defences like Pillboxes these anti-tank obstacles are still readily seen today. So many were laid down, and they are by their nature are so difficult to dismantle, that large numbers have survived in-situ and forgotten. Indeed just a few miles from where I live I recently noticed a row of 'teeth' alongside a railway line and realised they were a relic of a war that ended nearly 70 years ago.

Incidentally although Dragons Teeth were usually cast in linked 'sets' of up to six individual pimples on a much larger submerged concrete base (to stop undermining or lifting by engineers) there were also several types of free standing obstacle in service. These were built for quick deployment across roads and other lines of advance. The British came up with a design called the Buoy which was a free standing cone shape with a convex base about 2 ft high and 2½ ft wide. These were built to roll unpredictably and were conceived primarily to slow rather than stop an advance by light vehicles. Many examples of these also survive in locations around the country, with few people realising what they are.

Despite the rapidly moving nature of the North African campaign static defences were employed at various locations, such as around strategic towns like Tobruk. The Germans certainly employed the use of Dragons Teeth in conjunction with minefields, ditches and defencive positions and some of these can still be seen today around the border town of Bardia in Libya. This line appears to consist of a single closely spaced and staggered row of 'teeth' with defencive points and AT gun positions set back from the line and presumably fronted by a minefield.

I won't be using large numbers of these in my games but they will look effective around checkpoints, bridges and as part of hard defences around fixed sites like towns and forts.
Posted by BigLee at 07:48