Over the weekend I was able to focus on the next part of my 1942 North Africa project and painted the core of a British Heavy Armoured Squadron. This consists of three Troops of Grant Tanks and Two of Sherman's.

I have been looking forward to painting these as they include one of my favourite tanks, the M3 Lee/Grant Tank. 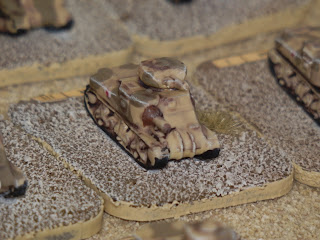 The M3 wasn't a great tank having been rushed through from design to first production models in under a year. But its hull would later go on to form the basis of the M4 Sherman and the lessons learnt on the M3 would shape American tank design for years to come. But for the British crews these were considered wonderful tanks, easy to maintain, roomy, reliable and packing the much needed 75mm duel purpose gun in its side sponson. This meant that for the first time British Armoured Squadrons could use HE rounds and gave them some degree of parity with the German Mark IV's.

There is an excellent example of a 'Desert' Grant at the Imperial War Museum in London. This tank was Field Marshal Montgomery's command tank and the main 75mm gun in the hull is fake.

To support these five troops I have two squadrons of Crusader II's and some AEC I Armoured Cars. I'll start work on these in the next few days.
Posted by BigLee at 06:36