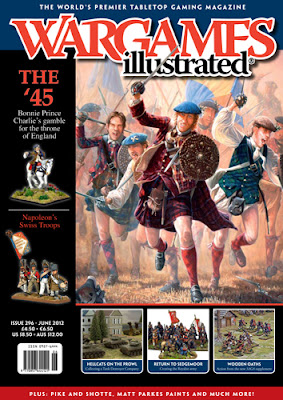 Wargames Illustrated is this month focused on the Jacobite Rebellion of 1745-6. As always though there is plenty more inside its covers to tempt players of all periods to pick up a copy. Mine arrived as the first of my new subscription and now that I have had a chance to read it I have to say its a corker of an issue! (I know I say that most months but its true).

I don't think I have ever been tempted to wargame the Jacobite Rebellion of Bonnie Prince Charlie, nor have I any desire to paint eye wateringly detailed Tartan on kilt wearing highlanders. But despite this I really enjoyed reading the themed articles in this issue. Andrew Bamfords opening article gives an excellent overview of the conflict as well as being beautifully illustrated as you would expect from this magazine.

Two more follow up articles round off this theme. The first contains a series of historical and what-if scenarios for the invasion of England. The second article looks at the wargaming potential of the situation back in Scotland where the Jacobite's went of the offensive in an attempt to secure their homeland with the aid of an allied French Army under Lord Lewis Gordon.

Moving back in time to a set of rules that has proved very popular in recent times. Wooden Oaths looks at the Saga rules for Dark Age warfare and the latest supplements and new factions available to players of the game. I have to say this is a very tempting looking game, especially as entry to the period takes very few models meaning new players can get started relatively quickly. This is definitely a set of rules that I can see going from strength to strength over the next few years and I will be very surprised if The Rejects manage to avoid playing it at some point in the future.

There are two other articles that made this issue worth buying on their own. First off a look at adding foliage camouflage to tanks by James Brown. I've seen this product on sale (from various manufactures including Gale Force 9) but until now haven't been tempted to buy it. However I may give it a go soon if I can pick up a packet at the next show I attend. The other article I found very useful was the ongoing series on painting by Matt Parkes. As I have said about his earlier articles they are shaping up to be a very interesting and useful series and I have enjoyed every one so far.

One of the things I like about Wargames Illustrated is that they regularly feature photo reviews of the main wargames shows around the world. This month they feature an excellent series of pictures from the recent Cold Wars show in the US. I'd love to do one of the big shows in the States at some point in the future, but I'll probably have to win a large sum of money first (unless someone takes pity on me and pays for my flight..wink, wink).

I say this every month but This issue really is very good, quite varied, full of amazing eye-candy and well worth the cover price.
Posted by BigLee at 07:30