The end of the Analogue Hobbies Painting Challenge is fast approaching and the pace of my painting has picked up as I try to get all my little projects concluded in time. This week has been particularly productive with an eclectic selection of miniatures finished and ready to play with.

One of the more interesting exhibits at the Tank Museum in Bovington is a light tank inside what looks like a wooden frame. It turns out the frame is from a Hamilcar Glider from WWII, designed to bring larger equipment right to the front line in airborne operations. In 1944 they were used to carry a special light tank called the Tetrarch to the landing zones of the 5th Parachute Brigade. 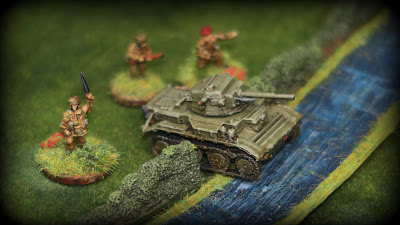 The Tetrarch (officially the Light Tank Mk VII) was designed in 1938 and first saw service in 1941. It had a 2pdr gun which was the standard for most tanks at this time, but by 1944 it was only really suitable for a support role. Only about 20 Tetrarchs were used in Normandy although most were lost in accidents and those that did survive found themselves inferior in firepower to the AFV's of the German Forces. However, that being said, if you are behind enemy lines and haven't got any tank support, a Tetrarch has got to be better than nothing! 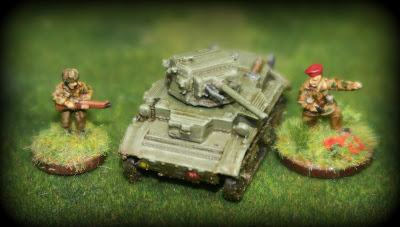 Because they were so few in number and didn't play a huge part in the Normandy campaign I found it very hard to lay hands on a 15mm model of a Tetrarch. In the end, I discovered thetankfactory.uk who could make a 3D printed version. This technology isn't perfect, and there were some printing lines still visible on the model when it arrived, but at least I had a model of the tank. Some careful sanding and varnish to smooth out the print lines and the resulting model looked a lot better. Actually, it painted up a lot better than I had thought it would and certainly good enough for my Chain of Command games.

A couple of days ago my long-suffering wife passed by my Operations Room and asked me what I was working on. I showed her my newly acquired 15mm nuns and there was a barely perceptible rolling of the eyes... I can't blame her, sometimes I look at what I'm painting and wonder what the hell I'm doing! 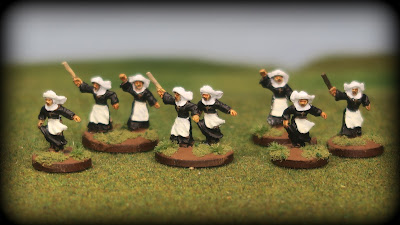 As with last weeks civilians these models are all from Peter Pig. They don't really have any game value except as interesting vignettes on the edge of a demo game but I wasn't going to let that stop me. First up we have several angry-looking nuns in fearsome headgear. A couple look like they are going to hit the Germans over the head, although the jury is out on whether they are wielding two-by-fours or baguettes! 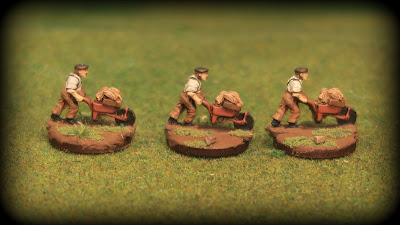 Then there are three men pushing wheelbarrows. Nice simple models to paint and because the contents of the barrow could be farm equipment or personal items, I can either use these in the fields or with my refugees. 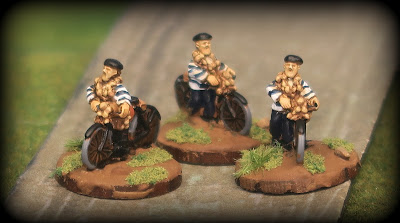 Finally, there are three Breton Onion Johnnies in the traditional blue and white striped jumpers and bedecked in strings of strong-smelling onions. I have visions of using these as the perfect spies, cycling around watching everything and being roundly avoided by the Germans because of the smell!

As I enter the final week of the Painting Challenge I am already in a reflective mood. I painted all the stuff I needed to get done and hit my target with room to spare, so in that respect mission accomplished. My final points tally isn't going to catapult me into the glitterati of the top ten, but I'm still happy with what I have got done. But there is a fly in the ointment. I was determined to get the whole of the Chambers of Challenge completed and had the final few rooms mapped out and was confident I could breeze through the last level easily. However, Royal Mail apparently has other plans for me. I needed a model for the Laboratory so I ordered the set of 28mm figures in line with that theme, with plenty of time for them to arrive. Nearly three weeks after receiving a 'dispatched' email no parcel had arrived. The retailer has kindly dispatched a replacement parcel but again two weeks have passed and I'm still waiting for the figures to arrive. Clearly, someone in my local post office has either decided not to deliver the post, or they want to keep the figures for themselves! To be fair, ALL my mail is arriving late (not just parcels) and its been like this for a couple of months. So my carefully laid plans for the final rooms of the Chambers are in disarray and its time for plan B. 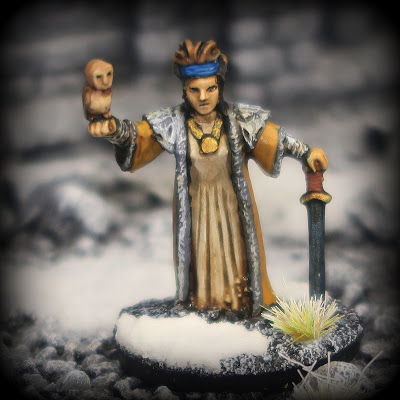 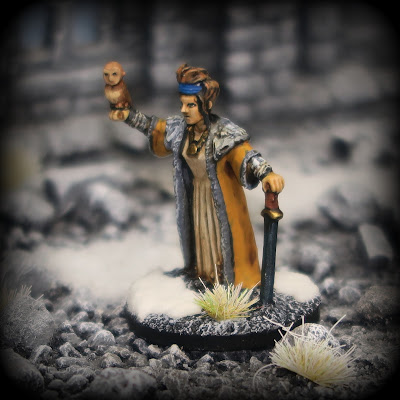 Rather than sit around not getting anything painted I decided to skip ahead and paint some of the later rooms and then post them when my Laboratory figures arrive, but with just a week to go and my faith that they will arrive at all dwindling, I've decided to take a different route to the end. Hence today's entry, my female figure is an offering to the witch of this level so that I can bypass the laboratory and teleport straight to The Snowlords Treasury (which I'll post here tomorrow). This 28mm figure is from Bad Squiddo Games and was beautifully sculpted by Shane Hoyle. Once again I'm painting this figure (indeed most of my entries to the Chambers) for my Frostgrave games hence the wintery base. 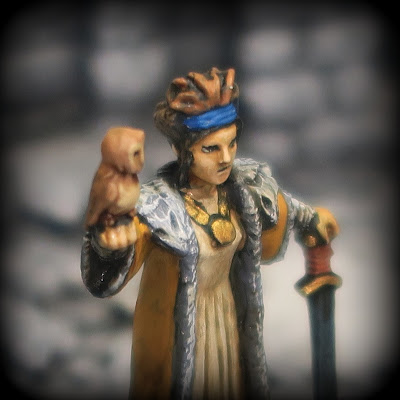 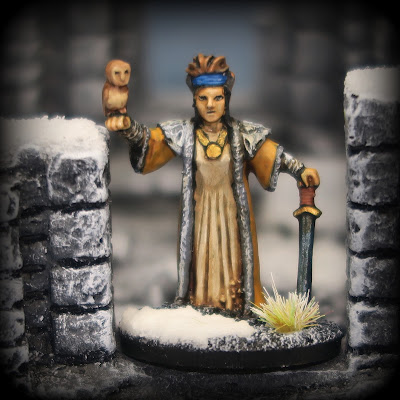 If my Laboratory figures turn up in the next couple of days I'll backtrack and then employ another teleport to get back to the Lair of the Spider. But if they are still not here by mid-week I'll use my teleport to take me to the Hall of Heroes before heading to the last room. I'm probably running out of time to complete the Snowlords final challenge, but I've warned the family that I'm hunkering down for a final burst of painting next weekend. Wish me luck!
So my progress has far exceeded my initial target and actually, I'm on course for my third-best performance in all the years I have been doing the Challenge. 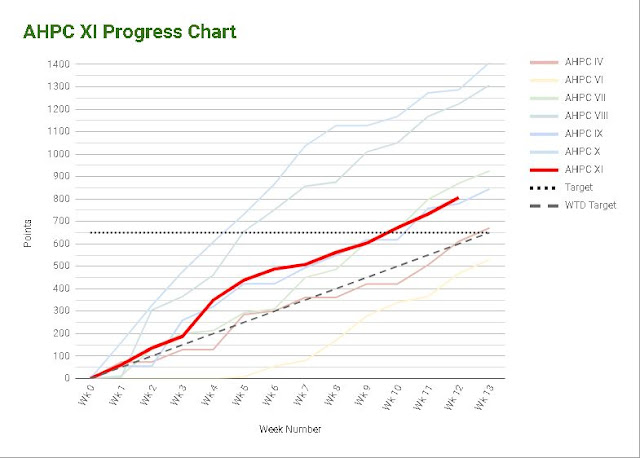 I'll post a picture of my final route to the Snowlords Chamber once I know what it is in my update next week.
Posted by BigLee at 12:00