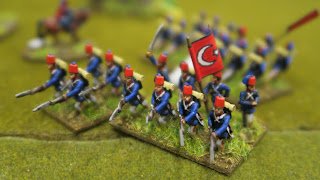 Over the weekend Postie unveiled his newly completed Turkish forces for the Crimean War. The Ottoman army was generally considered poor quality (from what I have read) being several years behind in terms of military technology and military thinking. What the Turks were able to do however was muster large resources to support the allied nations against the Russians. Their fighting force may have been small but they had arguable the best looking kit with their distinctive red Fez's and blue jackets.

Setup
We played a fictional battle with the smaller Turkish army holding key passes in mountains near the Danube. Ottoman engineers have been able to build some redoubts but the work is far from complete with several large gaps in their lines. Then the much larger Russian columns appear and begin to rapidly advance towards them.

Postie added up the points but the Turkish won a clear victory with 26 points to 20 points for the Russians.


Analysis
This was a cracking game with both sides fighting hard right to the end. We were enjoying ourselves so much we didn't notice the time slipping past and in the end our game went on for over eight hours. The redoubts made all the difference to the Turks despite the gaps in the line. Mark and I may have been able to exploit those gaps a bit more but to be honest the dice were just not in our favour. Poor luck aside I think Ray and Surjit played a good defensive game and wholeheartedly deserve their victory.
Posted by BigLee at 07:56