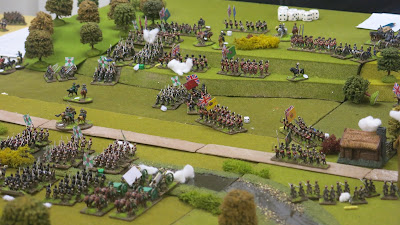 On Saturday the Rejects gathered in the Shed-o-War for our last game of the year. This was a special event as we were being joined by Miles (of Lair of the Uber Geek fame) and for this Postie put on a real corker of a game.

Setup
It is the 26th September 1854, the Battle of Alma was fought six days before and won by the British, French & Turkish allies. The beaten Russian army retreated back to Sevastopol to reorganise but has departed for fear of the main army in the area being trapped inside the town. Prince Menshikov has led his men to the open plains North East Sevastopol.

Heading slowly south to invest Sevastopol the combined armies make what was known as the 'Flank March' to avoid the towns big guns, spending the night of 25th September in their encampment at Machenzies Farm and around the Traktir Bridge. The British, French and Turkish forces have decamped and are heading south to invest Sevastopol in a bid to secure the vital supply  ports of Balaclava and Kamiesh.

The game is a 'What if' scenario; What if the Russian Army under Prince Menshikov had decided to threaten or attack the Allies on their Flank March. Scouts have spotted Russian troops gathering on the heights near the village of Tchorgoun not far from the Traktir Bridge. Lord Raglan being informed of the situation does not wish to be caught with his troops in march order, so orders those units which are close by to engage the Russian forces that are now in his rear and flank, while the rest of the army continues on its way. Mist hugs the battlefield and neither side can be completely sure where the enemy troops are at the start of the game...indeed some of their own units have become a little lost on the mist.


The Russian plan was deceptively simple; smash our columns into the Allied lines and hope we don't take too many casualties on the way in. Our Cavalry needed to keep the Allied cavalry occupied over on the right to keep them off my right flank. My division in the centre would keep the French busy and thereby stop Surjit from providing support to the British Division on the hill. This would isolate the British forces there, forcing them to fight alone and unsupported, which we hoped would maximise the chance of success for Miles' frontal assault on the left. The question was, would this work?

Analysis
This was a really tough game with both sides having to show a lot of nerve. The Russians had the simpler task as it was a matter of lining up our columns and trying to smash through the allied lines. Having said that the British didn't make it easy for them and the Russians had to endure a lot of casualties before they could deal back some pain to the allied army. The British French and Turkish forces had a somewhat harder job in they they had to hold their nerve as the Russians advanced. When the columns finally hit the British in particular had to use every ounce of reserve to stop a breakthrough, and by the end of the game they had taken serious casualties, including many Battalion commanders and one Division General.

Despite Ian's dire predictions of disaster early on, the remaining Russian commanders stuck with the plan and won the day. When Postie added up the final points tally the result was 23 points to the Allied Army and a resounding 33 Points to the Russians, although much of that was for enemy generals killed and unit colours taken in Melee.

This was a thoroughly enjoyable game that tested both sides and where the outcome was in the balance for most of the game.

UPDATE: I've had a couple of people ask me who makes the figures used in this game. I'm reliably informed that pretty much all the figures are by Minifigs. Only the French Cuirassiers and Dragons are by other manufacturers and we're not sure where they are from.
Posted by BigLee at 20:33