My recent game against the Padawan (The Battle of Beneventum) highlighted a problem with the way Maniples work in the original version of To the Strongest. Unbeknown to me this very problem had already been addressed in an update providing a new 'solution' for representing the Manipular system on the games table. The fact is that no one is absolutely sure how the Roman line exchange system worked (there are lots of theories) and this rule produces a satisfying result on the games table.

The new ruling simply allows for two similar light units to be joined to form a combined unit. This counts as a standard unit with two hits making them much more durable than the small units they are built from. When the first unit takes a hit it may swap with the second line and is able to make an immediate rally save. A simple and elegant solution and one that is relatively easy to recreate using individually based models in larger scales. However I am playing TtS! in 6mm with whole based units and I didn't want to re-base my existing models. In the end I decided I could simply stack the bases on top of each other then swap them around when the Hastati fall back. This sounds like an ugly solution but I found a way to 'reduce' the ugliness!

While I was mucking about with this I also decided it was high time I updated the labels on the bases. These were easily printed to fit the width of the base and simply list the unit name and the save associated with them. 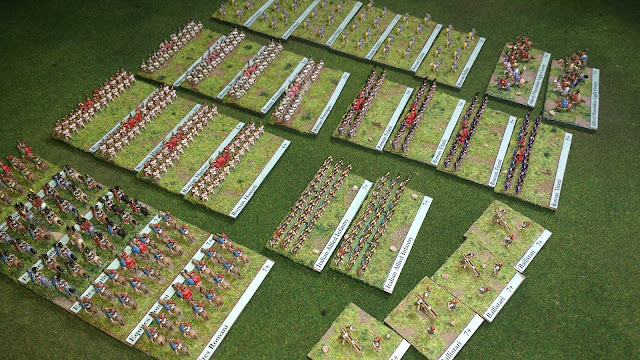 Now all I need to do is convince the Young Padawan to step in front of the Pike Steamroller a second time to see if the new manipular formation stands up better in a re-fight! I'll try and get a test game done in the next few days to give the 'new' rules a run out.
Posted by BigLee at 07:55