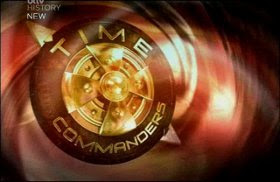 If you are a Wargamer and live in the UK then it probably hasn't escaped your notice that the BBC has revived the historical warfare program Time Commanders, this time hosted by Gregg Wallace. The format pits two teams of players against each other in historical scenarios and uses a computer simulation to track the action on huge TV screens. Each team has an elected leader and two captains who interpret orders via computer operators and each episode focuses on a different period of history. The show is interspersed with weapons and tactical analysis from co-presenters Mike Loades and Sandhurst’s Dr Nusbacher.


Right lets start on a positive. This is a history program that (sort of) gets wargaming on TV and in the public domain. The format is designed to engage the viewer in something akin to a game show but is actually a history program in disguise.  I like the segments that look at the weapons and tactics and the experts they have on hand do a good job of conveying the uniqueness of the periods being played. I would prefer these to be a little longer and more detailed but maybe that isn't suited to the time slot and target audience (I'm not sure who these are, but more on that later). 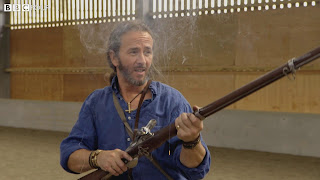 At the core of the show is the simulation engine being used to play the battles out. As in its previous incarnation Time Commanders uses a complex computer program which supposedly takes into account multiple variables covering everything from the weather to fatigue and morale. I say supposedly because there have been a couple of moments where I felt an in game event should have had a much more significant impact on the outcome of a battle. In particular the first show which re fought the Battle of Zama between Hannibal's Carthaginians and Scipio's Republican Romans. At one point Hannibal came under personal attack, was cut down and killed, but this event apparently had no effect on the morale of surrounding units.

Variables like this aside I felt that the computer program being used (it looks like a version of Total War) just didn't seem to offer a sense of realism and just doesn't work for me. The game play looks too fluid, movement appears to be too fast and the result is something that feels utterly unrealistic. The Waterloo game for example seemed to be over far too quickly with the whole battle descending into a rather scrappy close quarters slugfest. Part of the attraction of using a 'real time' computer game rather than a IGOUGO turn sequence tabletop game is that decisions are simultaneous and this will favour commanders who can think on their feet. But so far it seems that all the commanders have struggled to keep order and devise a proper strategy beyond reacting to the other sides actions. Worse still as a viewer its almost impossible to tell what is going on. I accept that some of this may be the result of poor editing but my attitude is that if it looks and feels unrealistic when what is the point of the show.

In the end the whole thing feels like a televised computer game (which of course it is) and not a 'proper' wargame and while the big screen and graphics look very cool, when the battles start I just feel the format was missing something pretty significant. Ground scales are constricted and unit numbers are representative rather than realistic and are therefore more akin to a tabletop wargame... which begs the question why not play a tabletop wargame?!?  If you have a big graphics engine to run a simulation on it should make at least some attempt as looking realistic. The analogue wargamer in me finds it very hard to be inspired by pixels instead of figures but I also find it hard to see what the non gamer would get out of this show.

One of my other major criticisms of the show is that it is sadly one sided in the Gender balance. In the first two episodes one of the team commanders was a woman but thus far she has been the only female competitor to feature. I hope this balance is redressed in later episodes but so far it seems the message from the BBC is that wargaming is only for blokes. I was also dismayed that among the presenting team the only female face to be seen was that of Dr Nusbacher, and this is only because 'she' used to be a 'he' when the format was previously aired. (acquiring a female presenter by chance like this doesn't count BBC!). 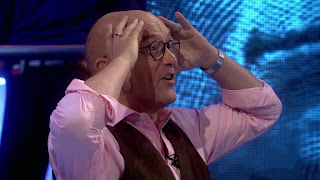 Lastly, and for me most importantly, I can't stand Gregg Wallace. He grates on my nerves when he's presenting TV programs about things he understands (ie food programs). Putting him at the helm of a historical gaming show is nonsensical. The BBC appear to be desperate to get their moneys worth out of this presenter by shoehorning him into as many shows as they can get away with. Wallace certainly has the energy and enthusiasm to carry off programs about food and cooking but in this format his exuberance just comes across as deeply irritating and condescending. Maybe its just me but I find it hard to think of a less appropriate presenter for this type of show. I can think of at least half a dozen excellent female presenters that could have been called in to host the show and reduce the teenage testosterone levels that turn what could have been a serious program about tactics and history into a typical Saturday in Games Workshop.

I guess my overall feeling with regard to this show is the same as when the format was aired before, and that is one of dismay. Its not an entirely unwatchable show but there are so many disappointing elements that I feel this has been an opportunity missed by the BBC.
Posted by BigLee at 15:10