Sting of the Scorpion 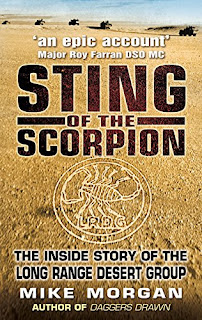 The story of the Long Range Desert Group has been written many times, often from a single perspective but rarely from the viewpoint of so many of its veterans. Sting of the Scorpion by Mike Morgan brings together the stories and recollections of dozens of former members of the LRDG that takes the reader from the units unlikely conception through to the end of the war.

Despite being a collection of many voices and many different styles the author has managed to bring them all together in a clear narrative that tells the inside story of the LRDG. This is not just the story as seen and narrated by the commanders but by the men of all ranks from Private upwards and is therefore a uniquely frank and complete tale of life as kings of the desert and beyond. This has been made possible by the incredibly strong bonds of comradeship that existed long after the war ended between the men of this elite unit.

Some of the stories are funny and irreverent truly reflecting the outward appearance of a lack of discipline that no doubt horrified officers from regular units. But these stories show that this impression was completely superficial and underneath the Arab headgear, dirty faces and beards were some of the toughest, most resourceful, highly trained and independent soldiers in the allied forces.

For me one of the attractions of this unit is the incredible glamour and romance of their private desert war. These soldiers were part explorer, part warrior and were literally venturing into the unknown with every mission. There are elements of the glamour of T.E.Lawrence in their desert exploits [a man who was an inspiration to some of the men who joined the unit in its early days] but this book also looks past North Africa into the units redeployment to Yugoslavia, Albania and Italy in the latter years of the war. Within months men who were desert specialists were accomplished mountaineers. The unit suffered heavy losses in the Dodecanese in an abortive attempt by British forces to take the Island of Leros. To their credit many of the LRDG men captured managed to escape and some went on to link up with local resistance fighters and continue a private war against the Germans until liberation in 1945.

This particular paperback edition crams in hundreds of individual tales of triumph, adventure, hardship and adversity and is a truly gripping read from cover to cover. I can give a whole hearted recommendation for this book for anyone interested in this unit.