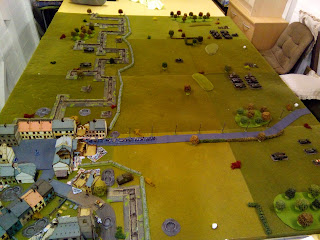 On Sunday several members of Posties Rejects gathered for our first game of the new year. We played a WWI game set in August 1918 with the Germans defending desperately against an Allied offensive that never seems to run out of steam. A mass of British Mk V and Whippet tanks, backed up by infantry, advance towards an apparently weak and demoralised German line. It should be a simple matter to sweep aside the defenders and continue the advance...shouldn't it?

The British objective is to get one of their tanks to the German base line. This would result in the weary German troops breaking and pulling back. The German objective is simple, stop the Allied advance at all costs.


Analysis
This was a tough fight for the British and I did feel rather sorry for them by the end of the game. They had taken a lot of casualties and most of their forces hadn't even crossed the center line of the table. But they were very unlucky with their dice rolls (fists full of hit dice rolled without a single kill) while for the German players sometimes it felt like they were hitting with every shot. Of course this wasn't the case, but the dice gods definitely favored the Germans in this game.

I had a particularly good game with seven tanks kills to my name by the end of the battle, most caused by the captured MkV in the center of our line. If the dice had favored the British a little more this would have been a much closer affair. As it was they still came to within an ace of snatching victory with their Whippet tank in the town. It took an impromptu roadblock, a quickly re-positioned flamethrower team and a lot of luck to deny the Brits victory.
Posted by BigLee at 17:05